Throughout this lesson we will be learning about and building rockets. Some rockets use solid fuel like the boosters on the space shuttle or in smaller model rockets, while others use liquid fuel. Liquid fuel, or liquid propellant, rockets usually contain a type of fuel and an oxidizer stored in separate tanks. When the two are combined and ignited, the resulting burn creates thrust which pushes the rocket upward. Since the flow of the propellant can be regulated in a liquid fueled rocket, the engines can be throttled, stopped, and restarted. The rockets you will be building will be propelled using a liquid fuel (water) and compressed air.

SPACEX focuses on reusable rockets. To save our environment, our money, and our planet! We will also be building re-usable rockets.

Over the next few lessons you will learn about how rockets work, what parts make up a rocket, and how the various parts, depending on how they are combined, make a water bottle rocket fly up several hundred feet, or just spin out of control and crash.

For every action, there is an equal and opposite reaction. If you build it well, it will likely fly well.

The final design is in your hands.

What Makes a Rocket?

Below is a comparison of a NASA Saturn V rocket that went to the Moon and a water rocket you might build. 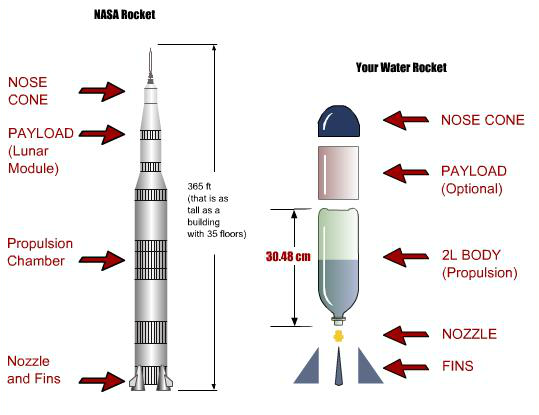 Parts of a rocket and their purpose:
Propulsion Chamber
The propulsion chamber of a rocket houses the propulsion system. It contains all the parts that make up the rocket’s engine; tanks, fuel, pumps, combustion chamber, and nozzle. Most liquid propelled rockets have two tanks; one for the fuel and one for the oxidizer necessary for the fuel to burn (since there is no oxygen in space). The pumps feed the fuel and oxidizer into the combustion chamber where they are mixed and exploded. This explosion, or combustion, produces hot exhaust which is passed through the nozzle and produces thrust. The more thrust the propulsion system produces, the heavier the rocket can be and the faster it can fly.

Fins
The fins of a rocket provide stability during flight. They help the rocket maintain its orientation and intended direction of flight. If a typical amateur rocket was launched without fins, it would soon begin to tumble. This is caused by the way aerodynamic and other forces (such as wind) act upon the rocket in relation to the forces that are exerted upon the rocket by the motor and by gravity. The fins also add drag to the end of the rocket like the feathers on an arrow that help it fly straight.
Note: Most modern rockets can pivot their exhaust nozzles to provide stability and control.  Modern full scale rockets do not rely on aerodynamics for stability and therefore usually do not have fins. 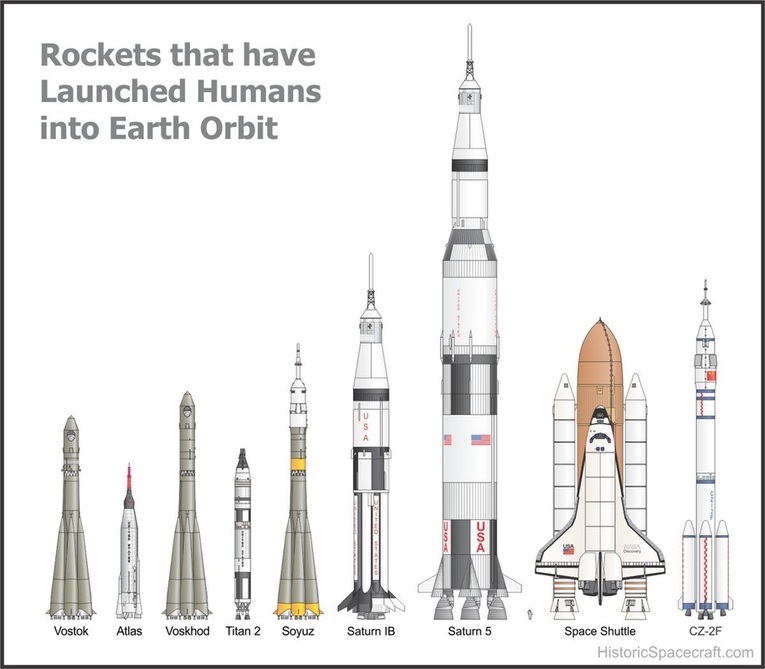 Now that you know about the basic parts of a rocket and what they do, write about each part and its importance in your own words. What will be different on your water rocket than on a “real” rocket and why? 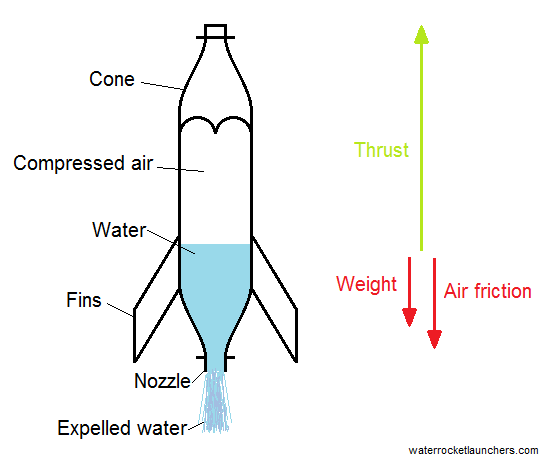 When designing your rocket, there are some things to be careful of and several factors that should be taken into consideration.

2. The first part of the rocket that meets the oncoming air is the nose cone. The nose cone affects drag. Drag (or air friction) is the aerodynamic force that opposes the rocket’s path through the air; the rocket’s thrust pushes it up, drag along with weight, try to slow it down. The smaller the surface area of the nose or nose cone, the lesser the drag. The term Coefficient of Drag (Cd) is used when measuring the amount of drag an object has. Flying a rocket without a nose cone will greatly increase drag and not allow the rocket to fly higher.

Here are some simple ideas for creating a nose cone for your water rocket:

“Bullet” Nose Cone
Another option for a nose cone is to make one out of stiff paper like cardstock or a class folder. Cut out a semi-circle and roll it together into a cone. It will look something like the pictures below.
“Egghead” Nose Cone
If you want your nose cone to have a more rounded shape, using a ping pong ball or plastic egg glued inside the cut off mouth of a second bottle works well. Use the same method as above, but you will make a second line and cut to remove the mouth and neck of the spare bottle. Be careful your second cut does not make an opening larger than the ball or plastic egg you are using.
Here are some other ideas for fin shapes.

4. Keeping the weight down is important. The lighter the rocket, the higher it will fly. However, it is often necessary to add a little weight to the nose of the rocket to move the Center of Gravity (CG) forward, thus increasing stability.

Before you build your rocket. Try to simulators to help you decide what designs might work best.

Based on what you have learned about rocket design (nose cone & fins) describe what your rocket will look like and why you chose that design on the blog.
f you are feeling adventurous and confident, the following series of tutorials (six) will teach you how to make a sophisticated rocket together with a parachute recovery system deployed using a wind flap. Additional materials like nylon model airplane hinges will be necessary, unless you can think of a good replacement!

Step-by-step – How to build your own rocket.


Below are the materials necessary to build various rockets, including one with a parachute recovery system. Your rocket may not require all materials pictured below.

Your rocket is ready to launch. After launching the rocket, you will need to record how high they go. Use the illustration below and Pythagorean theory  to help solve your problem.