Sugar gliders or their scientific name which is Petaurus breviceps. They are an omnivorous species of possum that can glide through the air. They are also marsupials which means that they carry their babies in a pouch. These species belong in the kingdom mammalia just like us humans. These creatures are found in trees and rarely touch the ground. Their membrane or the flaps on each side act like wings which allows them to glide. They are also called sugar gliders because they love the sweet nectar from fruits. So this creature belongs in the mammalia kingdom.

Tropical pitcher plants the scientific name of this plant is called nepenthes. They are a type of plant that belong in the plantae kingdom. They are called pitcher plants because they are a carnivorous plant that have cupped leaves that are filled with liquid that attracts flies and other insects to drink its nectar. The edge of the pitcher plant is slippery which causes whatever is on it to fall in and the plant eats it. The plant belongs in the plantae kingdom because it is an organism that absorbs water and  other substances through its roots, and gets energy from photosynthesis. 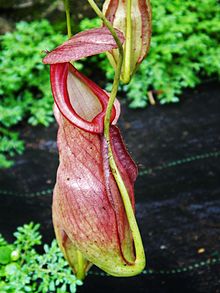