Mitosis is the process of replicating a cell and splitting in into two. Before it starts this process it must meet the certain requirements to stat. The first is to replicate its DNA, secondly is to gather enough nutrients, and lastly to make sure the DNA is not damaged. Then there are four stages of mitosis. Prophase, Metaphase, Anaphase, and Telophase.  First is Prophase: The nuclear membrane disappears then spindle fibers appear along with chromosomes forming X shapes. Metaphase: Spindle fibers attach to chromosomes and align them in the middle or equator of the cell.  Anaphase: The spindle fibers retreat to opposite poles of the cell pulling apart the chromosomes into two identical chromosomes. Telophase: Nuclear membrane forms around both new set of chromosomes and spindle fibers disappear. Cytokinesis: Finally cell splits into a identical daughter cell. 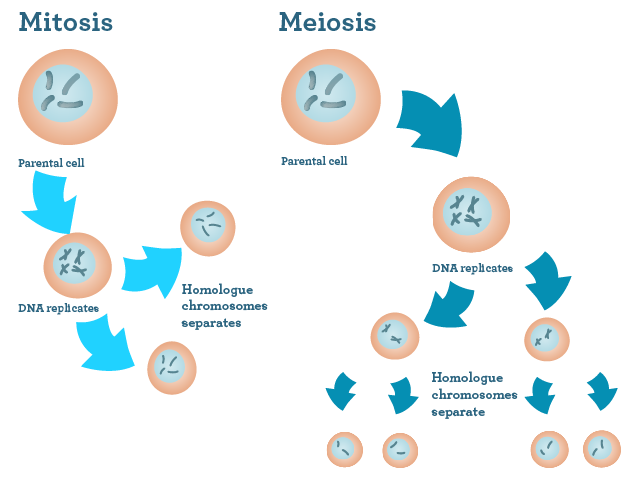 The difference between Meiosis and Mitosis:

In Mitosis there is only one parent, and in that matter there is no need to waste energy finding a mate. Also meiosis has two separation periods separating into 4 when mitosis only splits once into two daughter cells. Another difference is that in meiosis the homologues chromosomes separate not making them identical cells.  Making the daughter cell not identical but mitosis makes two identical cells.

All multi cellular organisms grow because of cell division. Cell division is making new cells all the time. Cell division is making one cell into two, with the help of mitosis. Like skin cells, they divide to develop the structure. This applies to any cell in a multi cellular organism. Each cell goes through the phase or dividing and they start with interphase. This phase is the longest out of the three steps, the cell must replicate its DNA, gather nutrients, and make sure its DNA is not damaged. Then mitosis go through the four stages of it, prophase, metaphase, anaphase, telophase. After that is finished the third step is the actual dividing of the cell, cytokinesis.