He stars as Macbeth’s general and companion which is further described in the poem.

Capital punishment is a death sentence to be hanged. Capital Punishment is a sentence that used to be possible to receive for murder, treason, and rape in upper and lower Canada (1865). As time went on the possibility for “the death sentence” became harder to get, capital offences were now limited to premeditated murder and the murder of a police officer, guard, or warren during duty (1961). After this rule was put into affect soon after came new conditions that capital punishment can only be given to the offences of killing an on-duty police officer and prison guards (1966). Finally, capital punishment was removed and has been replaced with a life sentence without possibility of parole for 25 years (1976).

If “Two Fishermen” were to take place in Canada I think it would’ve been sometime in the 1930’s. My reasoning why is because back then certain towns were very small especially in Canada so with everything being so close together and being able to walk to a nearby lake and everyone knowing each other. The way the characters in the story communicated between each other was a give away as well. The reason I didn’t say any earlier was because there were cars that sped away and cars didn’t really become popular until the 1920’s and 1930’s.

I feel as if Thomas Delaney should not have been killed. He did the hangman’s job for him and killed the man who raped his wife and back then if you raped someone that was considered a punishment fit for the death penalty. Another reason why Thomas killing that man was justified was because if somebody were to do that to one of your family members, chances are you would have the same kind of feelings Thomas was having, he on one hand acted on those feelings which got him in this situation. In the end, I think Thomas should’ve just let the government do its job instead of taking it into his own hands and doing it for them. the last reason I have that Thomas Delaney should not have been killed for his actions is, what did it solve? It didn’t bring back the life of the rapist and it didn’t bring his family any ease of mind knowing he’s dead for avenging his wife. 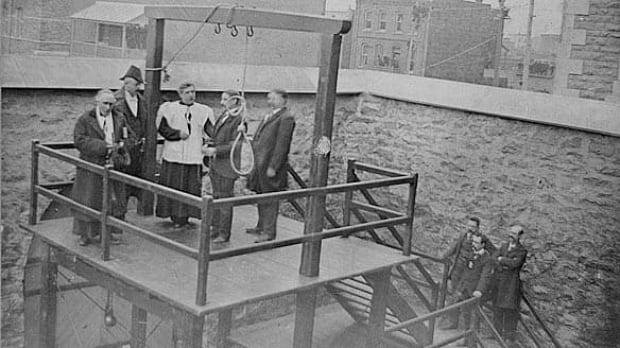 this is a photo of the gallows where Ronald Turpin and Arthur Lucas, the two last men in Canada to suffer the death penalty, were hanged.