I hypothesize that boiling will be way safer and more efficient. Boiling beats the tablets in time and being cleaner. From the research, I have done the tablets are not always guaranteed to be 100% clean. As well as boiling. A risk is that Purifying tablets do not 100% cleanse all of the bacteria in water so when we conclude the experiment we will not be drinking the water. Boiling water can take up to 15 minutes on average to kill everything. while the tablets take 30 minutes to start working. There are a bacteria named cryptosporidium which causes people to be ill and diarrhea. which is why my group and I believe boiling is more effective. The reason I believe boiling is more effective because it takes half the time and still takes out way more bacteria in the water.

For our experiment, we will be boiling water and using water purification tablets to compare which is a cleaner way to sterilize water to make it clean enough to drink. We will first use a 2 litre pop bottle to make up the shell of our filter for both the sterilizers (You cannot boil or use the tablets without using a filter to take the dirt out and other loose items like bugs) Then we will put a paper towel in to prevent the sand from falling out the bottle. On top of the paper, we add sand to be the base of our filter. Then we put charcoal on top of the sand to add an extra layer of filtration. We will add another sand layer and then another charcoal layer. And to finish, we add a gravel/pebble layer on the top. Finally, we add the dirty swamp water and wait around 30-45 minutes for all the water to come out. After waiting the water will all come out and be ready. We pour the filtered water into a separate cup and add the water purification tablets and mix for 10 minutes. When 10 minutes Is over, we let it sit for 40 minutes. After 40 minutes it should be clear and clean.

When we constructed the water filter we put a paper towel at the tip to allow water to exit but not gravel, charcoal, and sand. as you can see the Fresca bottle is upside down because that is how we built the contraption with a large hole at the top to insert our ingredients. To captivate our water when it falls below. We repeated this process 4 times for each test. The total amount of time it took to filter all of the water was around an hour and a half. We noticed that before we filtered the water there was a tiny invertebrate in the water we could not capture the water as it was too small. The filtering process was the most boring time of our project but very important. When we concluded our filtering process we were finally ready to begin sterilizing. We had a bowl full of the water for the tablets and we put the tablets into the bowl and mixed for 10 minutes. After 10 minutes we waited 40-50 minutes to see a change in the water clarity. it started to look a bit cleaner. Less yellow than it looked an hour ago. When we boiled the water it looked very yellow and didn’t look safe to drink as the tablet water looked like it was way better and cleaner. When we grabbed the results we noticed that the boiled water was, in fact, cleaner than the tablet water. despite the yellow horrid colour, it was cleaner. After we filtered and sterilized the water we used water test strips that were used to test the water when we went out as a class to oxbow pond. The strips test for carbonate, hardness, pH, nitrate, and nitrite. the strips were fairly accurate as we used an electronic pH tester to see the real results for pH. The test strip above is testing the boiled water and the one on the bottom tested the tablet water. This was a decently dangerous experiment. Boiling the water could burn us if we were to spill the water. Also if we handle the water and we consume food and get some stuff on the food we can get super ill. Solomon my partner was dangerously close to the thorns when collecting the water if he were to get stabbed by the thorns he could fall in the water and that could mean he could be stuck in the mud. But that’s just the worst that could have happened both Solomon, ilia and I did not sustain any injuries. 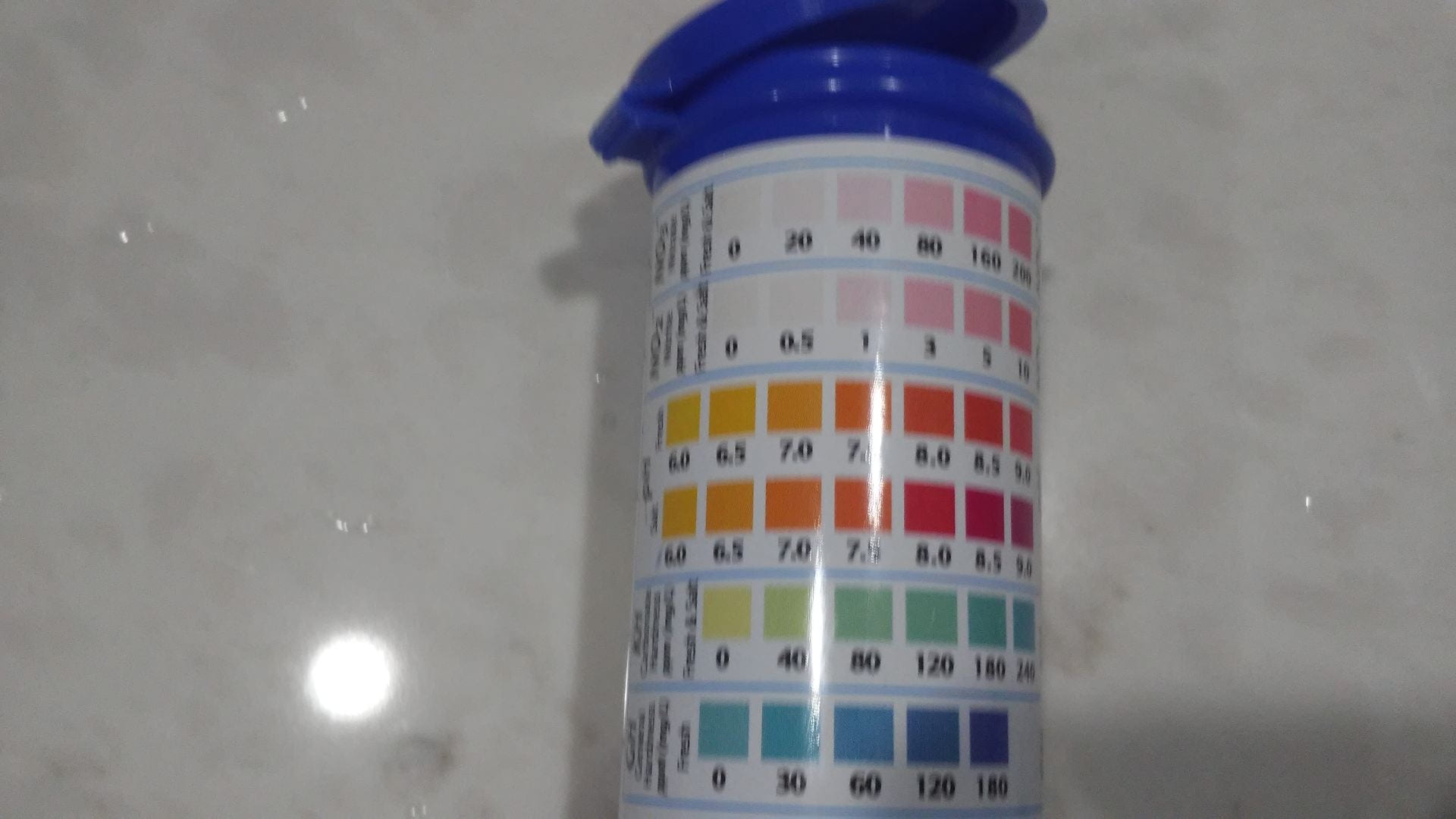 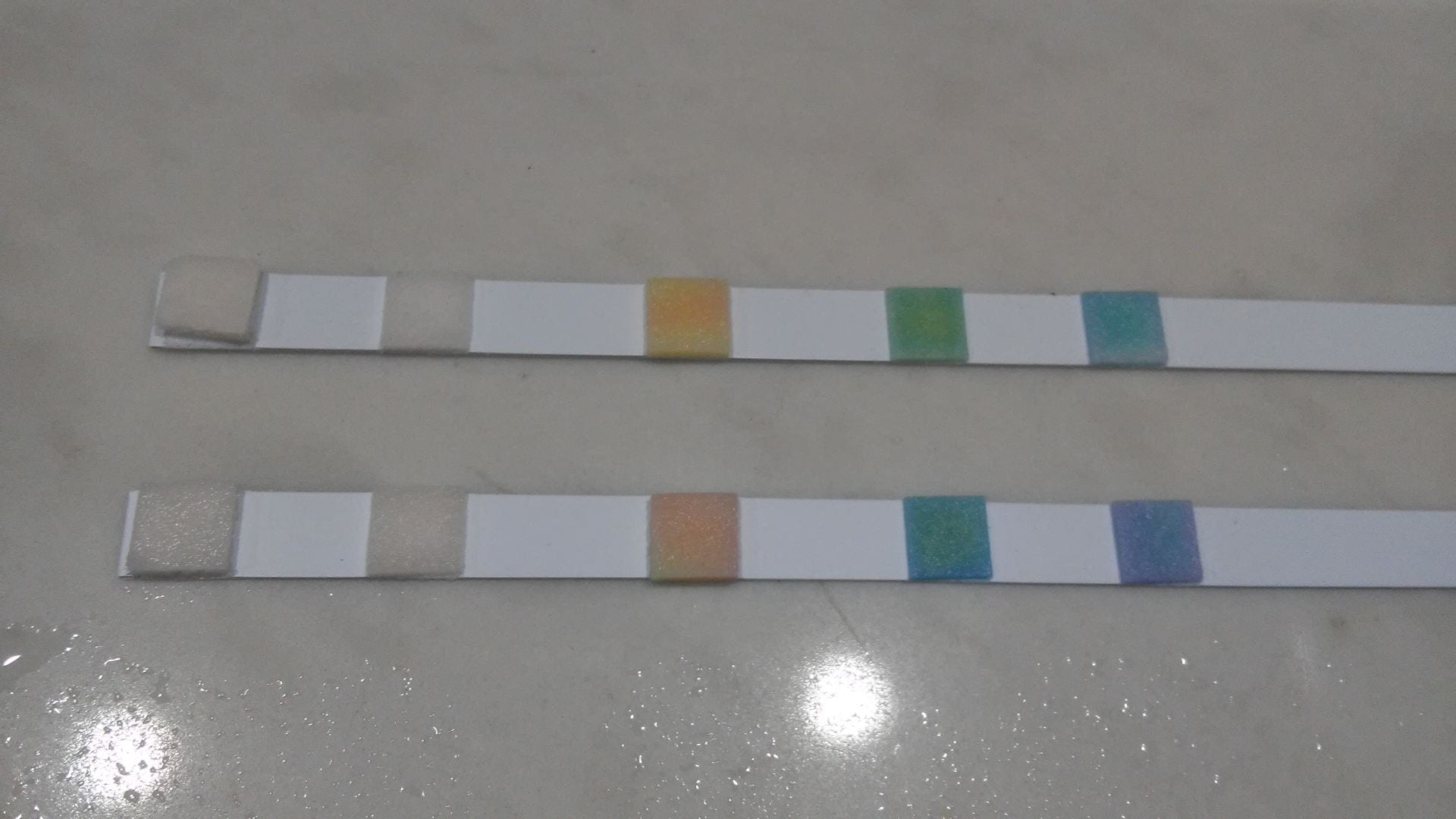 Some ethical, cultural environmental issues are how people around the world get clean water in sub-Saharan Africa people don’t have clean water. Purification tablets make sure you have decently clean water but boiling promises you 100% that all of the bacteria are wiped out. The only problem is boiling requires way more equipment and is not easy to set up while the tablets only require a second to set up.

This bar graph shows the chemicals that were in the water. Only the visible ones of course that were identified using the water strips. pH aka potential hydrogen is the measure of acidity in the water. pH is only ranged from 0-14. But it is recommended you only drink water within 6.5-8.5 pH and both of our tests fall in the line with that barrier. More pH equals more alkaline and less pH equals less acidity. Water hardness indicates the amount of calcium and magnesium salts in the water. The hardness for the boiled water was only 60 as the purification tablets double the hardness. And finally, carbonate. Carbonate is the measure of bicarbonate and carbonate anions essentially they both relate to the measure of alkalinity. Having average alkalinity will mean that it will destroy acids making the pH less acidic.

For our experiment, the boiled water had (8) pH which is a healthy number but seriously close to the barrier. The tablets had a super low number (6.5) pH is on the edge and if it we’re to go down it would be unhealthy to consume. (60) Hardness which isn’t too bad it is considered pretty soft water. (120)Hardness for the tablets. it is high meaning this water is super hard. And lastly, carbonate. both tests scored a (120) for carbonate which is decently okay. Both tests did pretty well on the water and none were dangerously unhealthy.

Looking through our research and data, Boiling water is a better purifying technique, Meaning our hypothesis was correct. In the graph boiled water had a higher pH and maintained hard water which is safe to drink. The hardness of the purification tablet was better than the boiling. And having a higher alkaline level is safer. One mistake that interfered with the experiment was our water tester. The water tester had if it would work was able to test how clean the water was giving a number to define the level of contaminants in the water. When we used the faulty tester it said the tablet water was highly contaminated which we knew wasn’t true so we had to switch to water testing strips to see a more plausible result. If we wanted to improve the results we would add more material in the filter to filter more of the water and even do it 3 extra times. As a result, this was a very interesting and fun experiment to perform with my group members as we thought boiling would be the better alternative and cleaner for those in need.