An Axolotl or Ambystoma mexicanum, fits into the Animal Kingdom.

It is an amphibian found in Mexico. It is in the phylum chordata, and is a carnivore. It is closely related to the Tiger Salamander. They feed mainly on insect larvae, mollusks, and crustaceans. The Platypus or Ornithorhynchus anatinus, belongs to the Animal Kingdom.

It is a mammal, in the phylum chordata,  Found in Australia, the Platypus is grouped with mammals like echidnas, into a separate class of mammals called monotremes, which are mammals that lay eggs. It mainly feeds on invertibrates like insect larvae in the river and creek floors. It also sometimes feed on shrimp and water bugs.

The Asian Pigeonwings flower, or Clitoria ternatea, in in the plant kingdom.

It is found primarily in Southeast Asia, and photosynthesizes. It has been introduced into Australia, Africa, and America. It is in the order Fabales. It gets is name from the flowers resemblance to female genitals, hence the name Clitoria, or Clitoris flower. It has been used to colour foods in some countries and has been said  to have many health benefits. 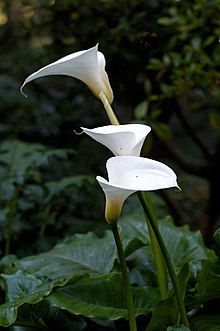 Zantedeschia aethiopica or Calla Lilies. It is native to Africa in Lesotho, South Africa, and Swaziland. It grows mainly in streams, ponds, or on the banks. It can grow up to 1 metre tall and releases a sweet smell during the summer. It is harmful to digest and the digestion of the raw plants can cause swellings. stomach pain, and diarrhea. 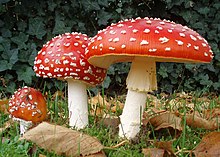 The Fly Amantia or Amanita muscaria, is a red, and white spotted fungi, that is classified as poisonous. Human deaths are very rare, and it can be eaten after some preparation. It has hallucinogenic properties. It is one of the most famous of the toadstool species and is used in popular culture as a symbol for mushrooms.

Conocybe filaris is a mushroom found in the pacific Northwest. It’s visible characteristics are similar to that of a common lawn mushroom. It has the same toxins as the death cap mushroom, and is potentially fatal if eaten. It can have similar symptoms to food poisoning o the stomach flu. The symptoms may ease and then come back fatally.

Fungi have chitin in their cell walls and do not photosynthesize, they are heterotrophs.

Caulerpa lentillifera is a type of green algae that is edible. It is one of the only algae that is cultivated and farmed for food. It is commonly known as Sea Grapes. It is a soft and succulent type of algae.

Cyanidioschyzon merolae is a small  club-shaped, unicellular red alga that lives in high sulfur acidic hot spring environments and can be found in Naples, Italy. The cells are simple, with only a single chloroplast and a single mitochondrion . It is used as a model for biochemistry study and biology, because it’s simple structure.

Algae photosynthesize, but lack the multi-cellular reproductive structures of plants. They lack stems, roots and leaves. They have cells different to those of animals and plants. They are a major food source for much aquatic life.

Yersinia Pestis is the bacteria that caused the Black Death Plague. Yersinia is carried by fleas on rats, and one bite is enough to infect a human. This specific bacteria has killed millions, and though the plague is over a hundred years in the past, the bacteria still has outbreaks in Africa, and even North America.

Clostridium tetani is the bacteria that causes tetanus. is is found in soil, dust and animal feces. when the spores enter a deep flesh wound or gash, they grow into a bacteria that produces a toxin that can cause the stiffening of muscles and cause muscle spasms. This can result in lockjaw.

Bacteria don’t have a nucleus. They also lack membrane-bound organelles, such as mitochondria. Bacterial DNA is contained in one circular chromosome, in the cytoplasm. Bacteria also have a cell wall.

Archaea are single-celled organisms. They have no nuclei, or other membrane bound organelles. They are prokaryotic.

Methanocaldococcus jannaschii is an Archaea . It lives in hydrothermal vents on the ocean floor living with the pressure of more than 200 atmospheres, and at high temperatures. It survives without oxygen and produces methane as a product of its metabolism. Haloquadra walsbyi is known as the salt loving archaea. It lives in salty environments like the Dead Sea. and uses energy from the sun to photosynthesize. They are square-shaped and have gas-filled sacs that allow them to float. They can also link together and form large sheets.