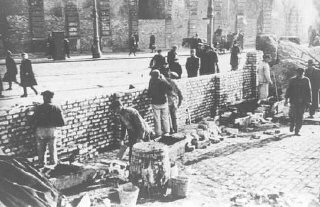 After reading the first 4 chapters in “The Cage,” written by Ruth Minsky Sender, I understand the ghettos a lot more than before. People are stuck living in the city because the Nazis put barbed wired cages so no one can leave and nobody in the city is able to have any freedom. People are starving and they aren’t getting enough food/water in their system. If people have diseases they won’t receive any help because they are either taken away from the Nazis or they can’t get any help from the doctors because they don’t have the supplies to help and cure the ill. The cities won’t have any education so the people around would have to educate each other on their own time, a lot of the parents taken away forces their children to become orphans most of them being helpless and unable to help one another because some of them are sick and are unable to move. People die daily because they don’t receive any help from the Nazis. The Nazis treat the Jews like they are nothing, they force the Jews to line up and wall to the next camps and if they don’t walk they will hit by one of the soldiers and would have to line back up in the line while bleeding from their head