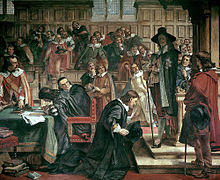 A member of Parliament kneeling to Charles during the Purge

The first component is the Battle of Naseby, where Charles’s army was outnumbered by a thousand and Charles’s confidence wasn’t drawn down by anything, he thinks he is unstoppable because he is a “god” but all this battle was going end in Cromwell’s favour and not Charles’s. After 3 hours fighting, Charles lost the battle and retreated back to England. After the battle, Charles lost a BIG portion of his army leaving him to surrender to become over confident and fight until his last breath.

the battle of Naseby

The second component is where Charles surrenders to Cromwell, I think this plays a big part if it was a “what if” situation, because I thought he would over confident and fight back because he assumes he has all of this “power” that him and his left over army can fight off the rest of the Cromwell’s army. But I suppose he did make a good choice if he doesn’t want to die, yet. 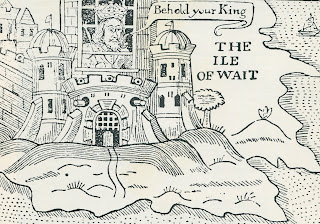 Charles escaped to the Isle of Wight

And the last component is Charles escaping and making a deal with the scots so they can fight on his side. I think by now Charles is power hungry, he is desperate to have England to himself again. Cromwell was notified about this and were about to have the last war, the war that will end the civil war between Charles and the parliament. Charles again lost to parliament and was captured. Only if he was cooperative with parliament and their ideas to end the war and still letting him be king only with less power.

Modern map of the Battle of Preston

In my eyes I think the most big game changer consequence was when the parliament was purged and was separated from the people who are loyal towards the parliament and not to the king. Because if this even never happened and the 500 members of the parliament would’ve let Charles live and the execution would’ve never happened because people knew that if this king is sent to prison or is executed, then the son would have to take over but his son Charles is in France, He is unable to become king when he is far from his home country. But when this does lead up to Charles’s trial, the events and choices would be a lot different if it were the Rump Parliament. Charles could be spared but instead have limited power and still have England as a Monarch. But at this point the Rump Parliament was either desperate or didn’t think straight, they really wanted to get rid of this King so they can live a proper life instead of having a king and living in anarchy.  But decisions were hard to make back then when you are dealing with a king that caused so many problems to England. And the other problem was to how to keep the government the same without making any changes to it.

The Republic and the Monarch

Honestly, Cromwell might be the most hypocritical leader when he decides to do this, Oliver made the most immature move when he closed parliament by force because they took too long when choosing who or how England should be ruled. Cromwell could’ve thought that if he took down parliament he would be put in charge of England, and he would be called king. But he was un denial to be called king although he ruled very close to one. If parliament was still up, they could have just made Cromwell a general or a war leader. And the military would have to agree with that because its parliament. His ideas weren’t meant to exist, none his ideas should be allowed only to defend England. Cromwell actually experience parliament closing down 3 or 4 times when Charles was still king, and he was not pleased with what Charles did, but yet, He made the mistake himself.

The only effective thing that Cromwell has done was prevented the civil war. He knows the sights of war he knows people would die and families would break apart. This has probably be the only idea where Cromwell sat down and thought about it, unlike his other decisions. But Cromwell had to give up his only moment with England being a republic. It was either England becomes part of Scotland or England remains as is but with a King once again. Since Cromwell was those leaders that are very attached to their country and Religion, he had to disband the republic just to keep England Puritan friendly and its own contry.

This has possibly be the biggest change to England for decades; Charles II learned from his father and limited his power with parliament once it was reopened. Power plays a big role when it comes to Monarch countries. Charles cares about his people and didn’t want to cause chaos to the people of England. I first thought that Charles II was going to be a king that changed all of England once he did this because parliament is similar to a king but the power is split between the House of Commons and the House of Lords. And even better that there was no more “Rump Parliament” the members of parliament was later put back to their spots, unfortunately most of them died. New members were later recruited and decisions and ideas didn’t have to rely all on the king anymore.

James putting Catholic in Parliament without a test act is terrible; it’s like when sports have their own fans. Those fans will cheer for those team that they admire, except they are cheering for a king and have power to control what to do. There can be many crimes that James commits and the Catholics will be on his side no matter what the cost is. And in the past decades, kings and war leaders have been ruling England in ways that aren’t even imaginable, England has been living through Anarchy through those years and there has to be a point where all of it has to stop. Yet there is this vicious pattern with these leaders in England, it’s either the leader takes advantage of power or they are very ignorant and shortsighted. And here we have James thinking its all a game putting his “fans” in a powerful place.

Bill of rights must be the best end to the English Revolution as a long result of most countries has relied on government and not the president or king/queen. This is almost the same as modern day, the queen of England doesn’t have too much power but its shared with the government which gives people more freedom. So therefore the bill of rights allows people to make choices when needed, such as voting. This event has probably lasted for years or even centuries due to its success and if James would’ve never left his place we would probably be living in a monarch. Yet the government have finally made its move for over years and decided they didn’t want to have a king to make everybody live as if he wanted you to be living. 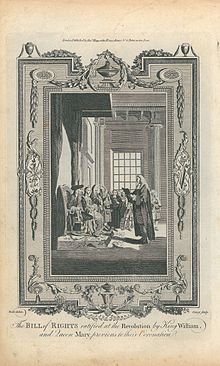 The Bill of Rights being presented to Mary and William