The characters we were synthesizing were the protagonists from American Dirt (Lydia), Red Rising (Darrow), and Son of a Trickster (Jared).

Darrow (Red Rising) does his best to escape the Red district and receives painful modifications that involve dying 3 times to fully transform. He goes through this so he can potentially live a happier life.

Lydia (American Dirt) goes through many dangers to enter America. She does this to escape a deadly drug cartel that her former companion is part of, and is currently trying to find her.

Jared (Son of a Trickster) has had to deal with many hardships in his life. Other than his dog, he feels that everything is against him. He often finds himself drunk to try and escape the troubles of his life. He bakes and sells weed cookies in order to make money to support his father even though it gets him harassed and even assaulted one time. When he believes that becoming sober will help him become happier, he persues it even though most of the people around him hate him for it.

Overall, the picture represents the idea that people will do whatever they can to get away from their troubles and find happiness.

Most people know about the children’s video game that is Mario Kart. At first glance, it seems as though it is merely for the entertainment of children with no future benefit. However, I’m ready to give 3 reasons why it is actually very useful for preparing for an important part of adulthood: Driving. As you may guess, I was once a child. I spent many hours of my childhood playing Mario Kart, and I still play it to this day. I always had a passion for driving, so this was the closest thing I had to it. Later on in my life, I was able to receive my Learner’s license and my Novice license on my first attempt. I strongly believe that Mario Kart has contributed to my success.

1. The Appeal to Youth
We all know that there are multiple games derived from the concept of racing. However, most of these games are extraordinarily complicated and would be a challenge to a person of youth. Mario Kart (Wii) separates itself from the other competitors with its simplicity and appeal to younglings. It consists of only 3 buttons required to play (more can be used for additional controls but are not necessary to play) along with the steering mechanics of the Wii remote. Which consists of only tilting it left and right.

Along with simplicity, the game itself is visually more appealing to children. The bright colours and familiar characters make it a first-choice game. Because of this, your children can begin their driving journey before they have started school. As a 4 year old, I was already considered a master in my household consisting of my parents (who did not play) and myself. This experience made me the wonderful and confident driver I am today.

There are multiple versions of Mario Kart, but the reason I am talking up Mario Kart Wii is because of the controls. Along with the button pressing mechanics. The main steering system is the tilting of the Wii remote. This is very important because it mirrors the real life mechanics of a steering wheel. In addition to this, there is a purchasable steering wheel shaped piece that can be attached to the Wii remote. Once again, this helps children understand the feeling of a steering wheel in their hands, without the dangers of actually driving.

Mario Kart Wii may be a good way to learn how to drive, but the purpose of the game is not learning how to drive. It is a competitive racing game; the aim is to win. This gives a certain amount of pressure (depending on the child) of being able to maintain proper technique when in a competitive setting. This gives children the ability to operate a vehicle later on. If they can constantly win races (which requires impeccable ability and focus under pressure) then they can transition to leisurely driving later on in life.

I hope that I have opened your eyes on the great importance of this beautiful game. Whether you have kids or not, you should still be motivated to make sure that the future streets of the future are protected and safe, thanks to the Nintendo video game released in 2008. Thank you for reading, I hope you will return for my future changing blog posts in the future.

Why is it that we spend so much time exploring beyond Earth and in space? What have we discovered that benefits us?

There are two parts to this question. The first one being “Why do we explore?”. Why do we want to explore what is beyond our atmosphere and on our planet? Our part of our research would be from our drive to understand fundamental questions like our place in the universe with the Earth and what is around us. As well us to quench our thirst and need to explore that is important for humans. An interesting answer was how it builds relations between other countries. NASA is a United States organization and the largest space exploration organization in the world. However, it is certainly not the only group of people who want to explore. Relations with other countries have started in order to develop better technology for space exploration.

Relating to the mention of answering questions like, “Where do we fit in the universe?”. We have made some large discoveries that affect our knowledge of the whole world and how we explore other places. The two largest discoveries I could think of were the discovery of a sphere Earth and our heliocentric solar system.

The round Earth theory was started in around 500 B.C. by Pythagoras who observed that the moon was sphere which meant that the Earth was as well. Not long after Anaxagoras studied the moon during eclipses and realized that the round shadow being cast on the moon was the Earth. This also led to more people following the round Earth theory. The final large discovery was by Aristotle in around 350 B.C., his observations of constellations and which ones you could see as you walked away from the equator put the final nail in the coffin for flat earthers. Depending on who you ask.

Further studies are shown in this video:

The heliocentric Earth theory was proved by Galileo in the 1500s. He discovered for the first time that there are moons orbiting around Jupiter, which sparked the idea that not everything orbited the Earth. Following that discovery, he decided to study phases of Venus’ which proved that it was orbiting the sun and not Earth. 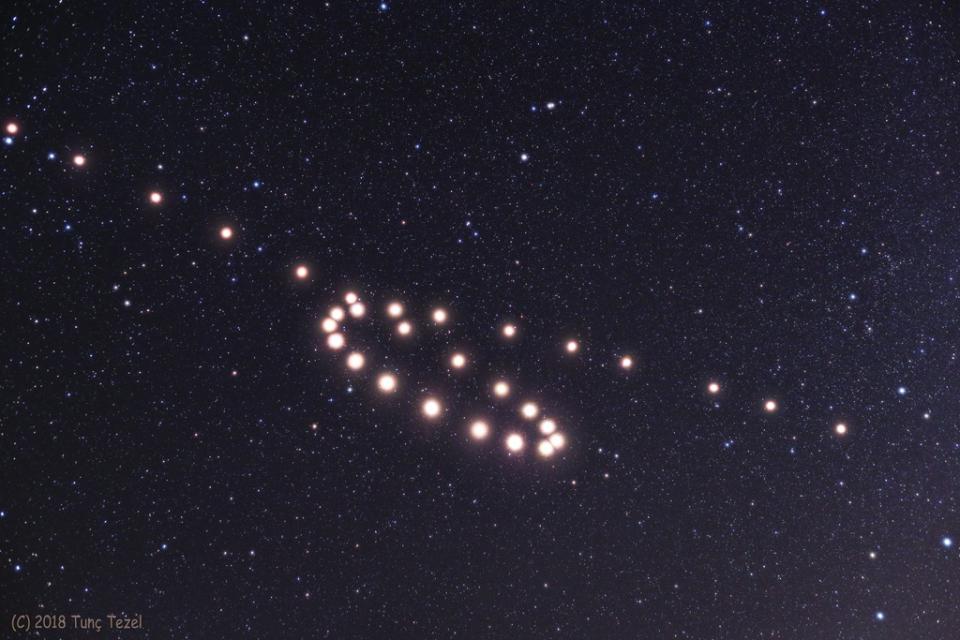 Although we have discovered so much about Earth and what surrounds it. There is still so much more to discover.

“Planetary Motion: The History of an Idea That Launched the Scientific Revolution.” NASA, NASA, earthobservatory.nasa.gov/features/OrbitsHistory.

My large question was “Why is it that we spend so much time exploring beyond Earth and in space? What have we discovered that benefits us?” My research was more based on the second part of that question. Part of it was personal opinion however because I thought of the discovery of a round earth and our heliocentric universe myself as I believed they were the most important discoveries that define how we see the Earth and the universe. I researched how these two things were discovered and why.

2. What new or familiar digital tools did you try to use as you worked through this project?

In all honesty, I did not use anything special in this process. I just used the internet like a regular person to research my questions. I also embedded a video/picture into my post. The only digital tool I used was the website Easybib to cite my sources.

3. What was the process you used to investigate the topic?

I feel this answer will be a bit similar to the first answer. I was trying to find discoveries that have benefitted us. I personally thought that the two biggest discoveries were the discoveries of a sphere Earth and our heliocentric universe. However, I could not just state these two answers and be done with it. I had to explain why it encourages space discovery, so I had to discover HOW these were discovered, the process that it took and why it changes how we see the world around us. Also, I wanted to get an answer straight from NASA on why space exploration happens, on more of a more personal feeling of why we want to explore.

4. How did you verify and cite the information you found?

5. How did the process of completing this challenge go? What could have been done better?

I think that this challenge went by quite smoothly. At first, I struggled to find a good question to answer, but once I found it I was able to explore it with the answers that I sought. I believe that I could have read the instructions better so I could have remembered this portion of the project on time, along with the comment from an outside source. However, overall I am pleased with my process.